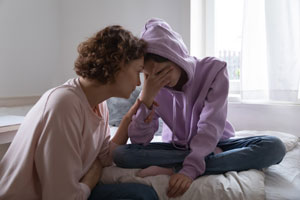 Stay Connected to Your Child. Harassment May Be Happening

“My daughter was being bullied for months for being Turkish, and I had no idea this was happening.”

When Ellen’s* daughter Sandy* was in seventh grade at Beacon Park School in Irvine, California, she seemed to have a healthy and perfectly typical seventh-grader life. She was happy and social, an A student, and had a group of close friends since elementary school.

When Ellen started noticing her daughter slowly becoming more withdrawn and losing enthusiasm to attend school, she initially figured this was just a normal case of teenage angst among friends that would easily get patched up the next day. Sandy was a little quieter and didn’t share anything with her mother, which Ellen took as a sign for nothing really serious or concerning.

Weeks went by. Ellen started to observe that her daughter was losing her appetite and rarely eating, didn’t want to go to school, and her grades were slipping. She started to find Sandy crying in her room. Ellen began to wonder if something serious was bothering her daughter. She’d ask carefully if Sandy was feeling okay or if there was any problem, but her daughter would always say she was fine or that it was nothing.

About a month later, a cousin who was the same age as Sandy visited from Colorado. Ellen thought this might help lift her daughter’s spirits and help her come out of her shell. Sandy seemed to be getting along with her cousin and had no problem sharing her thoughts and feelings with her, as they were the same age and had similar interests and experiences. In fact, Sandy started saying that she wished she could just go with her cousin to Colorado and move to her school. “I just want to move there and go to school with her,” Ellen recalls her daughter telling her. “I hate being here [in this school].”

Sandy’s words gnawed at Ellen and triggered her to be more worried about what could be bothering her daughter. Whatever it was, she wanted to understand how Sandy was feeling. So she asked her older daughter, who Sandy was close to and confided with often. “I was getting really worried so I asked her older sister, since I know they talk more about a lot of things that kids don’t really want to talk about with parents,” Ellen shares. “I asked her sister if there was anything bothering Sandy. That’s when she told me that there was this kid who was verbally abusing her.”

Targeted and Harassed for Months—Yet Nobody Noticed

“I was so shocked and horribly disturbed,” Ellen recalls. Her older daughter had finally shared with her that Sandy had confided in her about an Armenian boy in her grade level who was bullying and picking on her every day in school for the past three months, telling her things like, “All Turks are bad and should die; you and your family should die; you should go kill yourself.”

For Ellen, hearing that another kid was tormenting her daughter every day with such hateful and violently aggressive words was beyond shocking and disturbing. “It was like one of my worst nightmares coming true, where you think this sort of thing would never happen to your kid but it’s actually been happening for months and I never even knew about it.” Ellen immediately made an appointment to speak with the school principal to discuss the incident.

Ellen recalls the school principal was shocked and assured her they were going to take immediate action to address and resolve the situation. For the next couple of months, she kept regularly communicating with the school principal, keeping tabs on developments on how they were handling the case, while closely observing her daughter for any changes or progress.

“They [the school] kept letting me know how they were dealing with the issue; they told me they suspended the kid for a couple of days and spoke with kid’s family about what happened and what he was doing,” Ellen shares. “The principal told me that the family was very apologetic and said they didn’t know this was happening and couldn’t’t believe he did this.” Ellen also points out that she never actually met or spoke with the family on the advice of the school principal “that having us meet might just make things worse and that they [the school principal and administrators] would handle the case to make sure it doesn’t happen again.”

Ellen shares that the school principal and disciplinary team closely monitored both Sandy and the Armenian kid for several months, ensuring that they wouldn’t have the same classes anymore and that the hate speech or any harassment wouldn’t occur even outside the classroom. To be sure for herself and for her own peace of mind as well, Ellen also tried to look out for any repeat incidents and her daughter’s progress in healing and recovery from the trauma.

“After a couple of months, she seemed to be getting better and was showing interest in school again but it still took a few months to help her recover; we even got a psychologist outside of school she could talk to,” Ellen remembers. “She was very upset from the abuse, but also she had so many questions like, what did it all mean? What did we (Turkish people) do that makes them say those angry and hateful things? She was even feeling guilty for being Turkish, she felt like we did something wrong.”

For Ellen, while there was some relief that came with not having the incident repeat (as per Sandy and the school principal), the experience still engraved a mark on both her daughter and she. She will always wonder if her children are really alright, or if there might be a problem happening to them again in school that they are keeping to themselves to handle on their own.

“Sometimes, even if we choose really good schools, things can still go wrong and our kids may hide it from us,” Ellen realizes. “We need to pay closer attention to what’s going on in their school and how these incidents can be prevented.”

*Names were changed upon the subjects’ request for their privacy.

Do you have a story to share with us? Contact us using the form below and we will get in touch with you